(This was my first, and so far only, baby!) Okay so I didn't have a regular doctor. I had one in the beginning, but after 25 weeks I decided I just wanted my midwife, and my brother in law who was a chiropractor. All my testing was fine/normal except for the 37 week test for strep B: I was positive(it's a bacteria on your skin that could potentially harm the baby if it's in contact too long during the birthing process, coming out your hoo-ha). My midwife said I could still have the baby at home, but I had to hire a registered nurse. I was very upset, but we had a friend willing to be there, and I was able to purchase the medication for the strep B at a local pharmacy. I had to be hooked up to the IV a minimum of 4 hours prior to giving birth, so the fluids could get in my system and kill the bacteria. 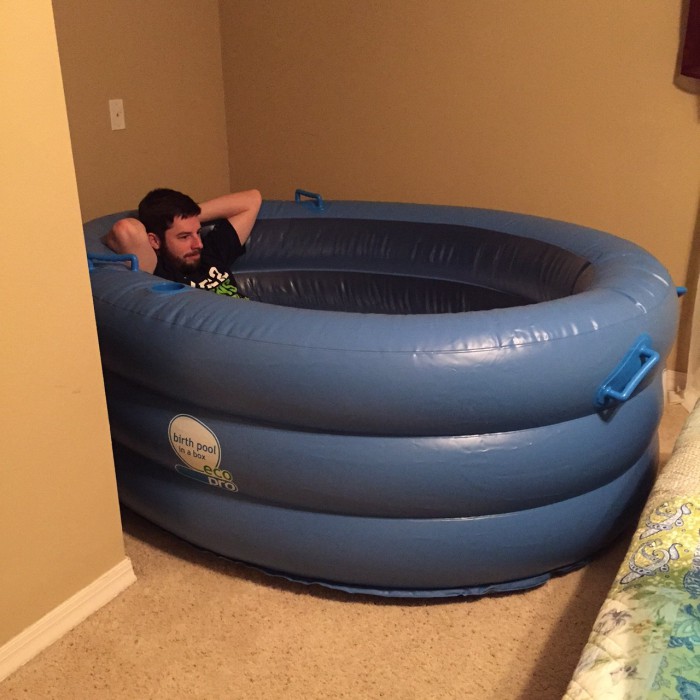 At 38 weeks my mid-wife and her apprentice did their home visit, showed them where the kitchen, bathroom, bedroom was, and how everything was going to be set up- we also rented a birthing pool from them as well! My husband was so excited he set it up the same night. The next evening we went on a “date” and bought most of the items for the water birth, we were so excited! But I was pretty sure since first baby's usually are born later than their due date, we had plenty of time, no rush to buy everything.

39 weeks and 2 days- it was 6pm and I realized I hadn't had any Braxton hicks for a while, so my baby girl was probably going to come late like I predicted! 7pm I got Braxton hicks. Thought I had jinxed myself. Ha. Ha. Ate dinner with my in-laws, played card games, went out to get ice cream with a friend at 10pm, all the while this Braxton hicks were still going! But they didn't hurt. Constant, annoying, but they didn't hurt!

So my husband and I eventually rolled into bed around 11pm, and I distinctly remember the baby moving into the middle of my stomach(she had been resting on my left side my 3rd trimester, so I knew exactly where she was). Still thought nothing of it though! My in-laws had joked I was in labor, my husband got super excited and I shot him down, there was just no way!

3am woke up drenched in a cold sweat, didn't know why… I got up and got a glass of water and went back to bed. Same thing with 4pm. At 5pm I had had enough! I texted my midwife in desperation asking how I could get rid of the Braxton hicks! She asked how far apart the “Braxton hicks” were. I timed them… 3-5 minutes. She suggested she come over and check herself. But I wasn't ready to have a baby! There was “NO WAY I was in labor”, I informed her. I asked her if I could take a shower and see if that'll help them go away; because they were starting to hurt. She said sure, but wake my husband up and text her when I got out of the shower. So I woke my husband up, told him what was going on, and took my shower. I had 10 contractions during my shower… Texted my midwife when I got out, and she informed me it had only been 20 minutes since I had last texted her. So she was coming over and I couldn't stop her.

My midwife arrived at 6:40am, and by that point I could no longer walk around normally- my contractions were so close and painful I was squatting by the side of the bed whenever one came on. My husband was running around frantically trying to get the plastic cover on the birthing pool and somehow fill it up, because we hadn't bought the adapter yet! (It connects the hose to a sink- like a rudest water spout. We did have a new hose though, whew!) He ended up duct taping one end to the shower head, and also putting all our large pots, filled with water, on the stove to warm up before pouring in.

My midwife immediately asks to check my dilation, which I grudgingly allow quickly before the next contraction, and I was already 6cm along! My midwife's assistant arrives and she takes over my husbands running around so now he and my midwife are kneeling beside me rubbing my back as I low moan through the contractions, I'm now kneeling by the side of the bed I can no longer support myself.

Around 7:30am I go through transition and puke 5/6 times; a little after that my midwife tells me the pool is halfway full and I can get in if I liked. They helped walk me over to the pool and ease me in.

IT FELT SO AMAZING. My contractions calmed for a bit and I was able to see that my sister in law had arrived! (She had previously done home births, but had never been to one, so I had invited her to observe mine, we were close enough that I felt comfortable with it.) I didn't say anything though. I was reserving my energy for the next contraction, because it came back with a strong vengeance! I was kneeling in the water, over the pool squeezing my husbands thumbs and moaning louder than ever! Oh they hurt! I started trying to push, but there was a lip in the way, and I couldn't get the right spot. My midwife suggested she either hold back the lip and I push again, or I can try a different position and see if that'll help. I spoke twice during my “hard” labor. Once to tell my husband to stop rubbing my neck, I was tensing up, (I actually just yelled “don't!” At him. Which he stopped doing immediately and went back to rubbing my back.). And I also asked for more water in the pool, which my sister in law gladly ran out to the bathroom and turned the hose on!

After the pool had filled up more I flipped over, and was kind of squatting, but on my back? The best description is like a crab walk. That's when I was finally able to push and get somewhere! I started pushing furiously! My midwife was down at my lower end, observing and making sure everything was progressing all right, and my husband was up by my head, holding a cold wash cloth over it. Every time a new contraction would come on and I was about to push I would tell myself “this next contraction! Do it! Push her out! Get her out and be done!” But I kept losing the contractions… I would push so hard, feel like I was getting somewhere, and then they were gone… I was getting super frustrated and my midwife could tell. She told me she could see her head, she had dark hair! I could reach down and feel it if I'd like. But I was too upset! I didn't want to reach down and feel it! I wanted to hold her and feel it!

I started pushing again and my midwife reached down towards me but I couldn't tell what she was doing… I got a leg cramp! I hoisted my leg out of the water and my midwife started rubbing it out when I suddenly got another urge to push so I jerked my leg back and shoved! Something happened! Her head was out! She was still under water, so I waited for the next contraction and PUSHED! Her shoulders were out! And yet she was still inside me..? My midwife told me she had a fat belly, and wiggled her out for me instead of making me wait for another contraction.

My midwife placed her on my tummy, and oh! It was love! My baby girl! She was born on a Tuesday morning at 9:39am staring straight at me, and then looking up at her dad, going and forth between us. She didn't make a peep actually, my midwife had to tickle her feet before she cried, and even then it was a quiet one. My midwife had brought an oxygen tank so we held up the air to her nose to help her breathe in some more. She just wanted to look at everything!

I couldn't believe it, it had only been 3 hours! 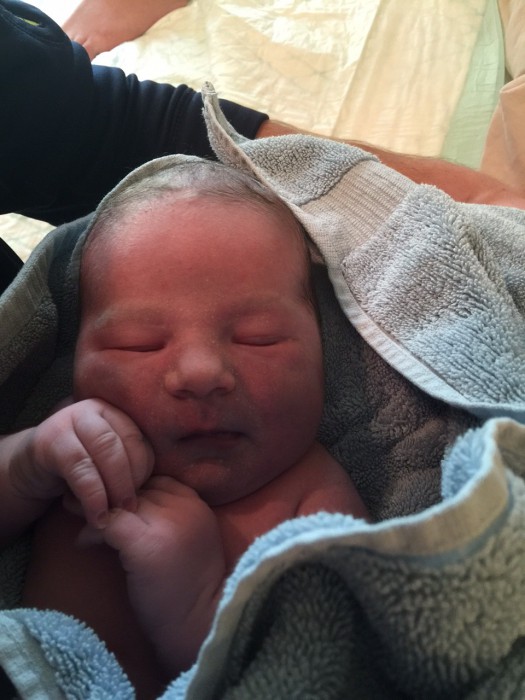 We waited about 10 minutes, then my sister in law cut the cord and I was helped out of the water onto the bed. It was so wonderful! I was covered in towels, with pillows propped onto my bed, holding my beautiful baby!

Then- I got another contraction! I jerked. I was terrified! Hadn't I just gone through all of that?! I had the baby! What was going on?

The placenta! My midwife told me to tell her when the next contraction came on, in which she slightly tugged the chord and it like… Literally plopped out of me. No pain.

They cleaned that up, then I was able to watch my midwife observe(?) the placenta and make sure all of the pieces where there and nothing was left inside, it was so interesting!

My friend who was going to be the RN never made it, and since my water had broken literally seconds before I pushed the baby's head out, there was no worry of contamination. It all happened too quickly.

Also, my midwife told me why she had reached down right before I pushed my baby out- her HAND was up on her face! That's why I had been losing the contractions! She had been stuck!

My baby's poor face was seriously purple and bruised. It took her two weeks to heal from that.

She was 8 lbs 2 ounces, 20.25 inches, and 4 days early! It was a beautiful spring morning in April, there was a dogwood tree that had just bloomed right outside the window.

My midwife checked me to see how I had birthed, and my tear was so tiny she didn't even bother stitching me. Within 3 days it had healed over. There had been a herb bath made for me in the bath tub, so while I was in there my husband got to hold our baby (Hallie) and put on her first diaper!

By 12pm our room had been completely cleaned up and everyone had left! The birthing pool was gone, any blood or gushiness had been cleaned, there was pads laid across the bed, my midwife had giant panty pads for me to wear with an ice pack in them to help my girl stuff heal, I had on a giant t-shirt, holding my baby, and we were alone! My husband fell asleep, our sweet Hallie was out, exhausted from being born, and I was left just staring at the two people I loved most in the world- my adrenaline was pumping so fast.

In the moment it was excruciatingly painful, but looking back it was so wonderful! My baby is now 3.5 months old and I can still count on one hand how many times she's actually screamed/cried. She still loves to look at and watch everything, and she'll talk and yell! But she doesn't scream, it's just her personality. Such a wonderful baby! Such a wonderful birth. 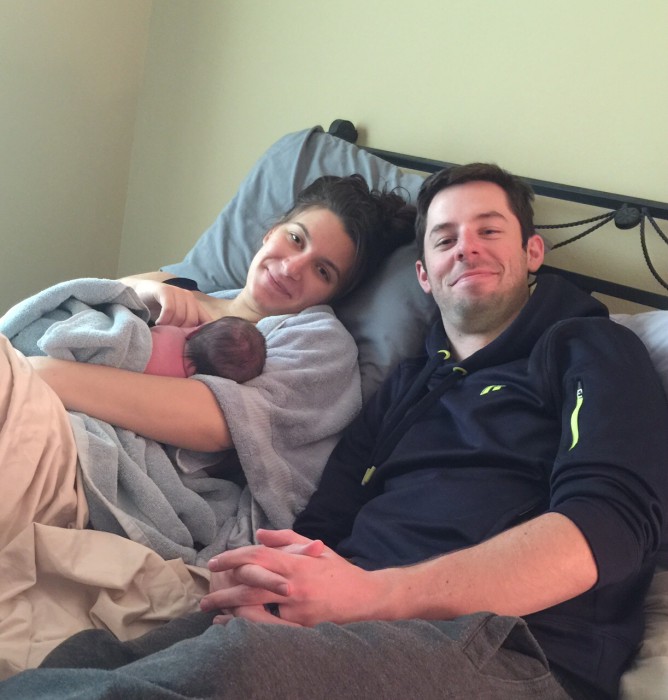 Write a Birth Plan That Works